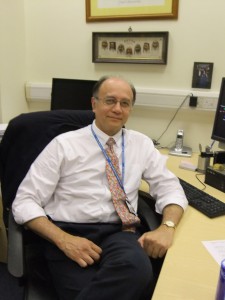 David Menon is Professor and Head of the Division of Anaesthesia, Principal Investigator in the Wolfson Brain Imaging Centre, and Co-Chair of the Acute Brain Injury Programme at the University of Cambridge. In 2013 he was re-appointed as NIHR Senior Investigator as one of the NIHR’s pre-eminent researchers.

He trained in Medicine, Anaesthesia and Intensive Care at the Jawaharlal Institute in India, Leeds General Infirmary, The Royal Free Hospital and Addenbrooke’s Hospital, and was an MRC Research Fellow at the Hammersmith Hospital prior to coming to Cambridge.

In 2006 he was appointed to the British Oxygen Professorship at the Royal College of Anaesthetists. He is Co-Chair of the Executive Board of the European Brain Injury Consortium, is a Founding Fellow of the Academy of Medical Sciences, and a Professorial Fellow in the Medical Sciences at Queens’ College, Cambridge.

He was the first Director of the Neurosciences Critical Care Unit (NCCU) at Addenbrooke’s Hospital, Cambridge, where he established the first recognised training programme for specialist neurocritical care in the UK. Protocols developed in the Addenbrooke’s NCCU have been shown to improve clinical outcome in severe head injury and rationalise the management of acute intracranial haemorrhage.

Professor Menon’s research interests include neurocritical care, secondary brain injury, neuroinflammation, and metabolic imaging of acute brain injury. He has also published on the physiology of coma and the vegetative state, and on mechanisms of anaesthetic action in the brain. In recent years he has represented the UK intensive care community in discussions regarding the impact of evolving legislative changes on research in critical care and emergency medicine.