The aim of the Consciousness and Cognition group is twofold. We investigate;

We use anaesthetic and sedative drugs with task and resting state fMRI to investigate the hierarchical organisation of cortical function. The results do not only inform our understanding of the neural correlates of altered states of consciousness but also enhance our knowledge of anaesthetic awareness. The figure shows changes in resting state connectivity following moderate sedation with propofol. 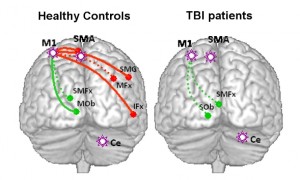 The neural basis for the common and disabling cognitive problems that account for poor quality of life in patients following traumatic brain injury remains uncertain. Conventional structural MRI or CT scans do not always account for these deficits, and many patients present with an apparent mismatch between their cognitive profile and the location of any structural lesions. We use fMRI to investigate the functional neuroanatomy underlying neurocognitive deficits following head injury, and the impact of novel drug therapies on these cognitive deficits. We carry out experiments with both healthy controls, to establish neuronal systems engaged as a result of normal cognitive function, and patients, to explore issues of reorganization of function. We use methods that are widely available such as traditional subtractive fMRI designs but also use innovative methods such as functional and anatomical connectivity analysis to establish whole network interactions in the context of specific task demands. The figure to the right shows connectivity from primary motor cortex in controls and TBI patients.